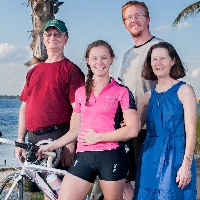 Why I Decided to Ride

I am excited to participate in the 2022 Victory Ride to Cure Cancer, a cycling experience in support of the V Foundation for Cancer Research. You can help by making a donation to support world-class cancer centers in North Carolina and across the U.S.

For as long as I can remember, I have had a personal connection with cancer - from grandparents to aunts and uncles, it was always something that was part of our family conversation.

That conversation became a bit more real in 2016 when my dad was diagnosed with nasopharynx cancer. Dad was super strong through 7-weeks of treatment that included weekly chemotherapy, 35 rounds of radiation, and the need to have all his tooth pulled. We were all so excited for him when he was able to ring the bell and say the cancer was gone.

Dad was a fighter for the next 3-years as side effects plagued him; and then in 2019 when he suffered a massive hemmoragic stroke - he still didn't give up fighting. For the next 9-months we all worked with him as aphysia made it hard for him to get his words out, and paralysis on the right side meant that Mom, Michael, and I had to help him get around (well, he would request Michael because I dropped him more times than can count and Michael was "big help").

Sadly Dad lost his fight in May of 2020 - but he forever lives on through his strong memory!

So I choose to ride this for my Dad, Meme, Uncle Earnest, my grandmother and grandfather who I never got to meet, and the many others in my family that have survived or lost their battles with cancer.

Please join me as I get back on my bike and enter my first event in 7-years. Your fundraising support means the world to me.

As Told by The Victory Ride...

Cancer is personal. It affects almost all of us in some way. The statistics are staggering: 1 in 2 men and 1 in 3 women in the U.S. will be diagnosed with cancer in their lifetime. The Victory Ride and the V Foundation are committed to changing those numbers, and so am I! Will you join me in the fight against cancer by making a donation today?

100% of your donation goes to life-saving cancer research.

Research saves lives. And it is under-funded. What can we do about it? I am joining the Victory Ride to help the V Foundation achieve Victory Over Cancer®. You can be part of that, too. Please make a tax-deductible donation today!

About the V Foundation

The Victory Ride is managed by Don't Ever Give Up, Inc., a 501(c)(3) charitable supporting organization formed by and operated exclusively for the benefit of the V Foundation.

Inspired by Jim Valvano's enduring legacy of passion and courage, we will never give up until we achieve Victory Over Cancer®.